Aaaaand we’re back! As the weather’s getting colder, Dormsessions is here to warm you back up again with three zesty live acts: We’ll start you off with something a lil’ Irish.

Aaaaand we’re back!
As the weather’s getting colder, Dormsessions is here to warm you back up again with three zesty live acts:

We’ll start you off with something a lil’ Irish. The Lasses began with a chance encounter of Margot’s husky alto and Sophie’s delicate soprano at Amsterdam’s charming Mulligan’s bar. The pair’s lofty folk harmonies rooted in traditional Irish melodies have since garnered them playing multiple shows a week. Get here at 20:30 to catch these girls – they are fresh off their fall tour and ready to mesmerise.

Next up we have quite a chance of pace – EUT. This five piece postpop band from Amsterdam is a true mash-up of tastes and influences, ranging from California to Bollywood. With an eclectic mix of ‘heavy beats and beautiful melodies’ fabricating ‘catchy pop songs in a straightjacket,’ prepare to have your musical horizons expanded. Before even releasing an album this band has already gotten Amsterdam’s attention and have a string of big shows to show for it. Catch them here before they blow up!

And finally, a well-deserved dose of rock-and-roll. Described as a mixture of shoegaze, grunge and psychedelia, HØUND are all of these and none. Driven by heavy guitars and strong vocals, fans of greats like Queens of the Stone Age and The Dead Weather will love HØUND. These six talented musicians just released their debut EP ‘These Hollow Minds’ last month. Those hollow minds will surely be ours once they’re through with us. 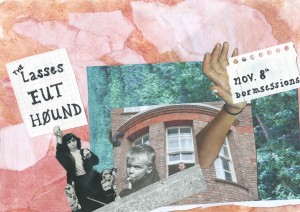